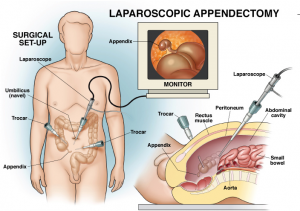 Appendicitis is a painful swelling of the appendix, a finger-like pouch connected to the large intestine.

It’s located in the lower right-hand side of the abdomen (tummy).

The condition starts as a pain in the centre of the abdomen. It then travels to the lower right-hand side and gradually gets worse.

Appendicitis is a medical emergency that usually requires urgent surgery to remove the appendix. If left untreated, the appendix can burst and cause potentially life-threatening infections.

It’s not exactly clear what the causes of appendicitis are, although it’s thought to occur when something, usually a small piece of faeces, blocks the entrance of the appendix, causing it to swell.

Appendicitis typically starts with a pain in the middle of your abdomen (tummy) that may come and go. Within hours the pain travels to the lower right-hand side, where the appendix lies, and becomes constant and severe.

Pressing on the appendix area, coughing or walking, may all make the pain worse. You may lose your appetite, feel sick and suffer from constipation or diarrhoea.

When to get help

See  Dr. B C Shah if you’re having abdominal pain that’s getting worse.

Diagnosing appendicitis can be tricky as it can easily be confused with other conditions, such as a bladder or urine infection.

if you get a pain that suddenly gets much worse and spreads across your abdomen. These are signs that your appendix may have burst.

In most cases of appendicitis, the appendix will have to be surgically removed. Removal of the appendix is one of the most common operations, and its success rate is excellent.

Surgery is most commonly performed as keyhole surgery (laparoscopy), consisting of three small cuts. Open surgery (a single large cut over the appendix area) is usually carried out if the appendix has burst.

The medical name for this type of surgery is an appendectomy.

Appendicitis is a common condition.

The condition is more common in men than in women. It normally occurs in people between 10 and 20 years old.

Although there’s no guaranteed way of preventing appendicitis, it’s thought to be less common among people who eat a high-fibre diet.

Appendicitis typically starts with a pain in the middle of your abdomen (tummy) that may come and go.

Within hours the pain travels to the lower right-hand side, where the appendix is located, and becomes constant and severe.

Pressing on the appendix area, coughing or walking, may all make the pain worse.

If you have appendicitis, you may also have other symptoms, including:

When to get help

Appendicitis can easily be confused with something else, such as bladder or urine infections, Crohn’s disease, gastritis, intestinal infection and ovary problems. However, all conditions that cause constant stomach pain require urgent medical attention.

if you get a pain that suddenly becomes worse and spreads across your abdomen. These are signs that your appendix may have burst.

If the appendix bursts, it will release bacteria, which can cause serious infections, such as swelling of the inner lining of the abdomen (peritonitis) and blood poisoning.

The appendix is connected to the large intestine, where faeces are formed. It’s located in the lower right-hand side of the abdomen (tummy).

Some cases of appendicitis are thought to be caused by a small piece of faeces getting trapped in your appendix and causing a blockage. Bacteria in the appendix then start to multiply, causing it to fill up with pus and swell.

Other potential sources of a blockage include types of inflammatory bowel disease, such as Crohn’s disease and ulcerative colitis.

It’s also thought that appendicitis may be caused by a stomach infection that has travelled to the appendix.

If the swollen appendix is not removed through surgery, it will eventually burst and the pus may infect other parts of your body.

This is dangerous as the bacteria can cause an infection in the abdomen (a condition called peritonitis) and anabscess.

Appendicitis can be tricky to diagnose unless you have the typical symptoms.

However, around one in two people with appendicitis do not have typical symptoms.

Moreover, some people’s appendix may be located in a slightly different part of their body, such as the pelvis, behind the large intestine or behind the liver.

Some people develop pain similar to appendicitis, but it’s caused by something else, like a bladder or urine infection, Crohn’s disease or gastritis.

A doctor will ask about your symptoms, examine your abdomen and see if the pain gets worse when pressure is applied to the appendix area (the lower right-hand side).

If your symptoms are typical of appendicitis, this is normally enough for  Dr. B C Shah to make a confident diagnosis.

However, if your symptoms are not typical, further tests may be required to confirm the diagnosis and rule out other conditions.

It can take several days to get test results. Therefore if appendicitis is suspected, it is likely you will be advised to have your appendix removed rather than run the risk of it bursting.

If Dr. B C Shah suspects that your appendix has burst, you will be  immediately treatment.

If you have appendicitis, your appendix will need to be removed by surgery.

It’s not always easy to make a clear diagnosis. But if there’s an outside chance that you have appendicitis, doctors tend to advise surgery rather than run the risk of the appendix bursting.

A keyhole operation (medically known as laparoscopy) is usually carried out as the recovery is quicker compared to an open operation.

Three small cuts are made to remove the appendix. The advantage of keyhole surgery is that scarring is minimal and the recovery time is fast.

Most people can leave hospital a few days after the operation, although it may be one or two weeks before you fully recover.

In some circumstances, keyhole surgery isn’t recommended. Open surgery will be performed instead.

In these cases, the operation will involve a single large cut to remove the appendix. Open surgery will leave a larger scar and it may be a week before you’re well enough to leave hospital.

Both keyhole and open surgery are carried out under a general anaesthetic, which means that you’re asleep throughout the operation.

If appendicitis is not treated, the appendix can burst and cause potentially life-threatening infections.

If your appendix bursts, it releases pus to other parts of the body, which can cause an infection in the abdomen called peritonitis.

Peritonitis is the painful swelling of the abdomen area around the stomach and liver. The condition causes your normal bowel movements to stop and your bowel to become blocked.

If peritonitis is not treated immediately it can cause long-term problems and may even be fatal.

Sometimes an abscess forms around a burst appendix. An abscess is a painful collection of pus that results from the body’s attempt to fight an infection.

Abscesses can be treated using antibiotics, but in some cases the pus may need to be drained from the abscess.